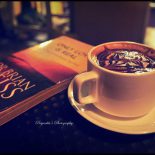 To Quill the Mocking World

Bird on the Wall 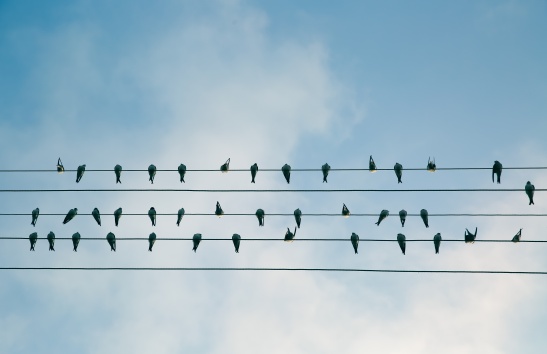 I am looking for ideas. Ideas about what to write when you have nothing to say. Ideas about how to write a ‘captivating’ story. Ideas about how to articulate my bold thoughts into simple ones. The writers’ clan on internet has been constantly advising on ‘writing 1000 words a day’ as a routine. I am not sure if I can take this up as the year rolls to end. So I carefully tuck it in my new-year resolution suitcase.

“Only put off until tomorrow what you are willing to die having left undone.”

Alright, Pablo. Let’s do it then.

I wish they glided like the tumbleweed. Or flowed like conversations. Effortlessly. Well, I have heard and known people to whom it happens without sweating. Like a blink of the eye. Yes! Just like that.

So, as I glance away from the white screen on my laptop- to reduce the strain on my eyes, to summon some magical words from the air, my eyes rest on the top left corner of the pillar. Just behind the pillar is a wall paint on which I never paid much attention.

The painting is some artist’s muse. There is no “Restricted entry” board stuck on the gate to ‘inform’ people that this is the server room and ‘DO-NOT-ENTER’ here. Just a black and gray paint of electric poles having numerous birds sitting on it. How metaphorical!

Do I know if this was the original thought which was put while making this painting? NO. However, if my assumption is true, it doesn’t startle me. Everyone in my office space was an artist in past life. Including me!

I have always been attracted to life. But then suddenly, lifeless birds became my subject.

I kept staring at the wall and tried to ‘study’ it. Just as people at Art Galleries do- trying to figure out the unspoken. I have never been to one because I fear some art-enthusiastic-handsome-guy would walk up to me and say “So, what do you think?” And I would go “Umm…ya it’s nice.”

So, anyways, back to birds. I started with running a count but then I realized it’s not about the number. All of them are painted in black, except one which is painted brown. In another observation, three of them are in mid-flight, while rest of them sit at leisure on the electric wires. On each of the two pillars, a bird sits upright. The silhouette looks like as if the bird is lost in deep thought, as if contemplating her next move. To fly or to not fly? 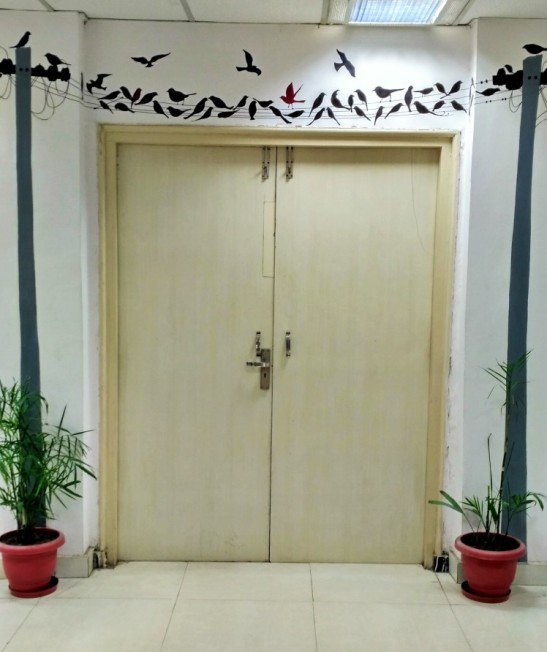 I’m not blabbering, am I? This is what I saw from the corners of my eyes!

Even as they all look similar, there is an intriguing difference among each one of them. Caught in the same cobweb of city life, they hang on to the same wire and pole, daily. Only a few could break away from the shackles of slumber and fly. The brown bird, who is not from the same city, also mingled to be like her city counterparts. Trying to fit in must have been difficult, but then what option did she have?

The conundrum is similar to what I faced when I was living my life in a comfort zone. It was difficult to break from the solace. It was frightening to jump into the ocean when I didn’t know how to swim. But is it not worthless to keep up with anything which you don’t love? Is it not pointless to run-whatchamacallit-indefensible? I mean you can obviously run as much as you can. But how about you attach a purpose to it? Like ‘The zombies are after my life, I have to run‘. Or ‘I gotta see where the sun sets, I have to run‘.

The point is, run from the morbid claustrophobic life. And find a purpose. Learn new things. Discover that green is also the colour of the ocean. Uncover the flaming red sky during a sunset. Pick an impossible New Year resolution. And make it possible. Write a postcard in indecipherable handwriting. Send it to any random address. Do the undo-able. Discover your limits. And more importantly, break free. FLY.

What’s the point of all this? I suppose- I am just generating ‘ideas’.

Shruti Sharma is a Guest Author at Soulgasm.

(Click here to read our first book “Mirrored Spaces” : A poetry and art anthology in English and Hindi with contributions from 22 artists)

2 comments on “Bird on the Wall”

This entry was posted on December 25, 2016 by Soulgasm in Non-Fiction and tagged Guest Author.